Once & Future #14 is releasing next month, and we’ve got a first look. The Green Knight is now at the party and the Nazis don’t seem to like the fact that he threw their friend’s head at them. Well, after killing more of the Nazis, the Knight asks for a challenger and who should step up to the plate, but Rose!

This is a big move, and I really am curious to see what happens knowing the story of the Green Knight. Once & Future is written by Kieron Gillen with art by Dan Mora, colors by Tamra Bonvillain, and letters by Ed Dukeshire.

Gran, Duncan and Rose are on a new quest to learn more about Merlin’s plan when they come face-to-face with … the fearsome Green Knight! But if they want to track down the powerful Nimue and stay one step ahead of their enemy, it seems that the unlikeliest member of the trio will need to play this knight’s twisted game… even if it means facing certain death.

Fans will be able to read Once & Future #5 on December 16 with physical copies available at local comic shops and digital copies through comiXology, Google Play, iBooks, and Madefire. 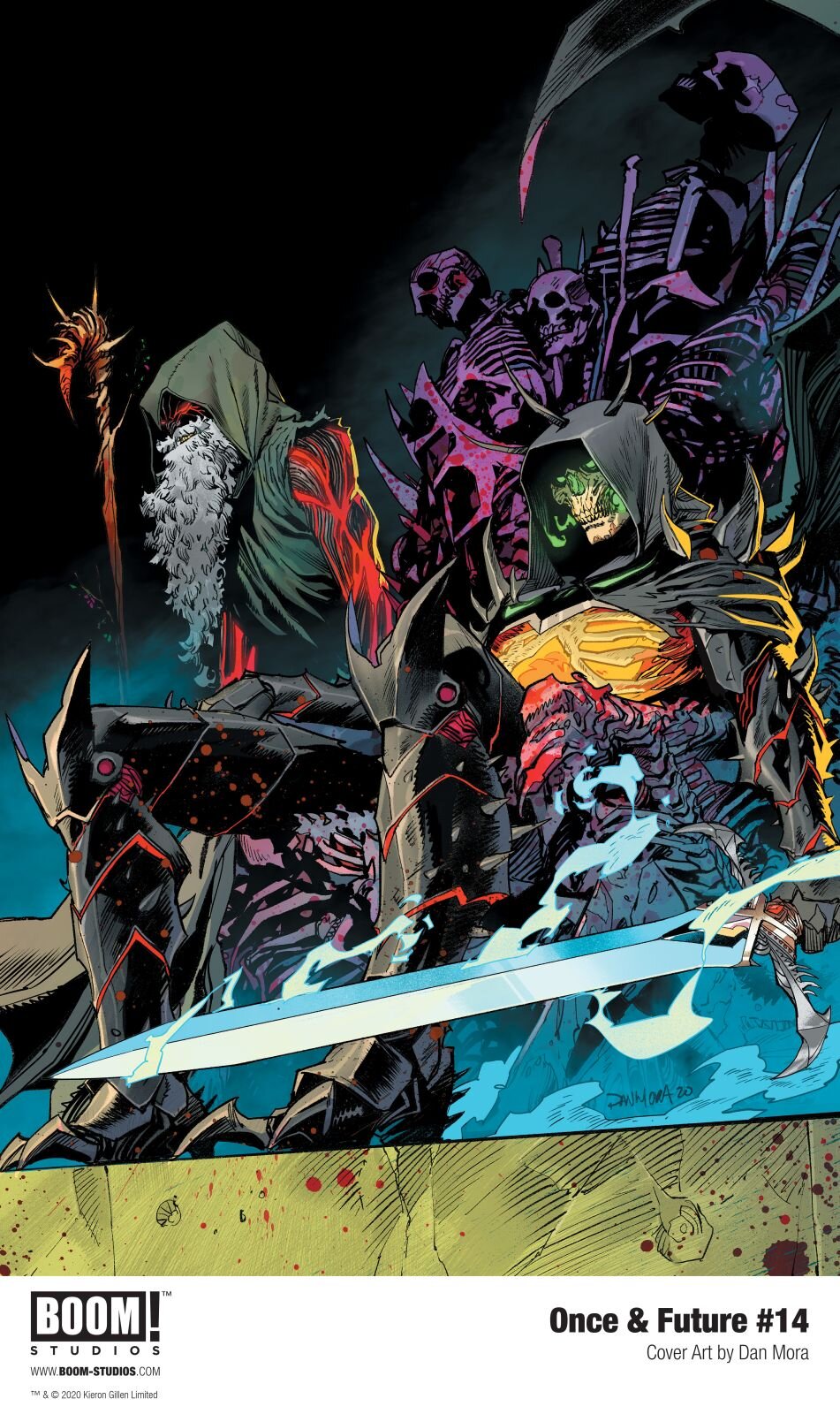 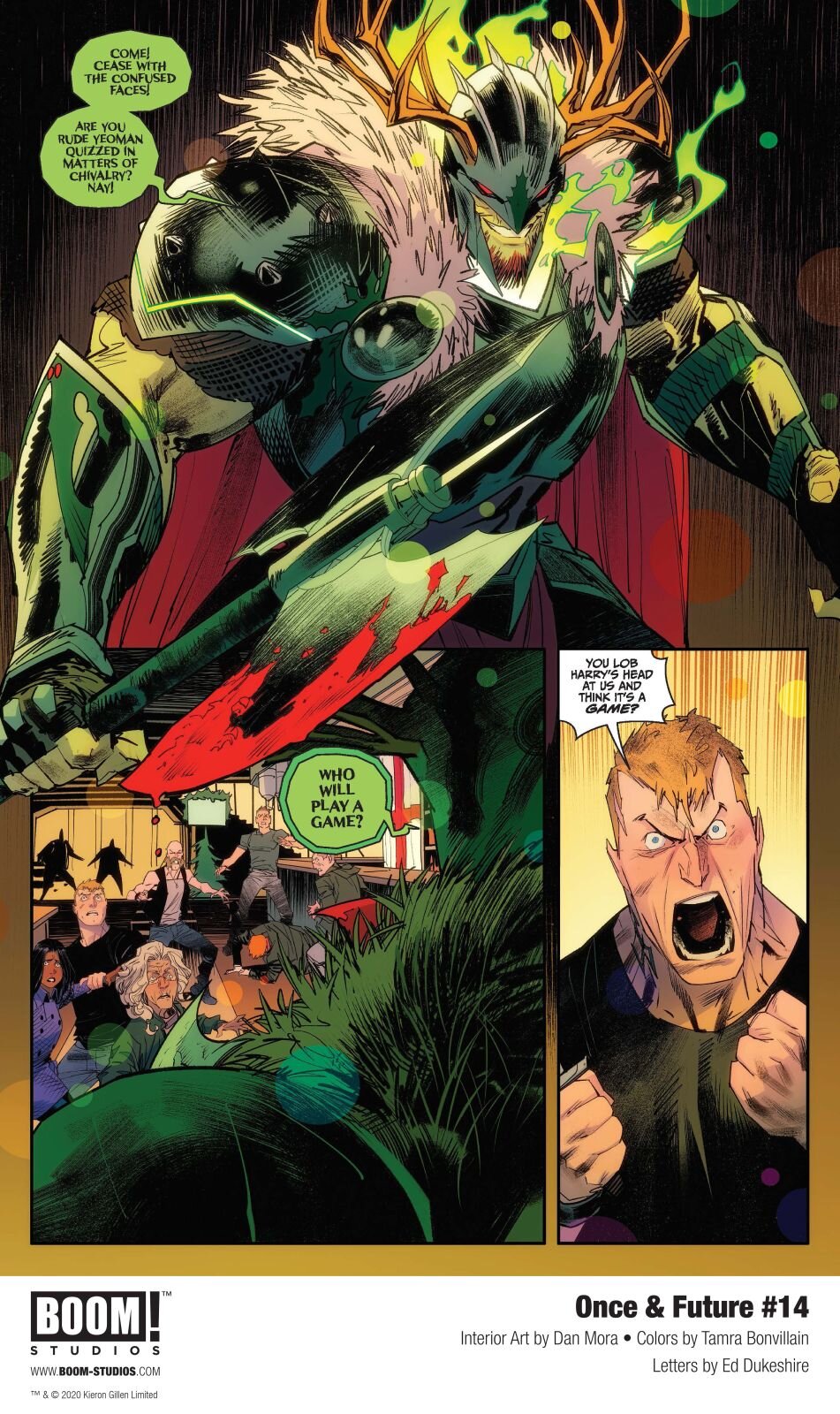 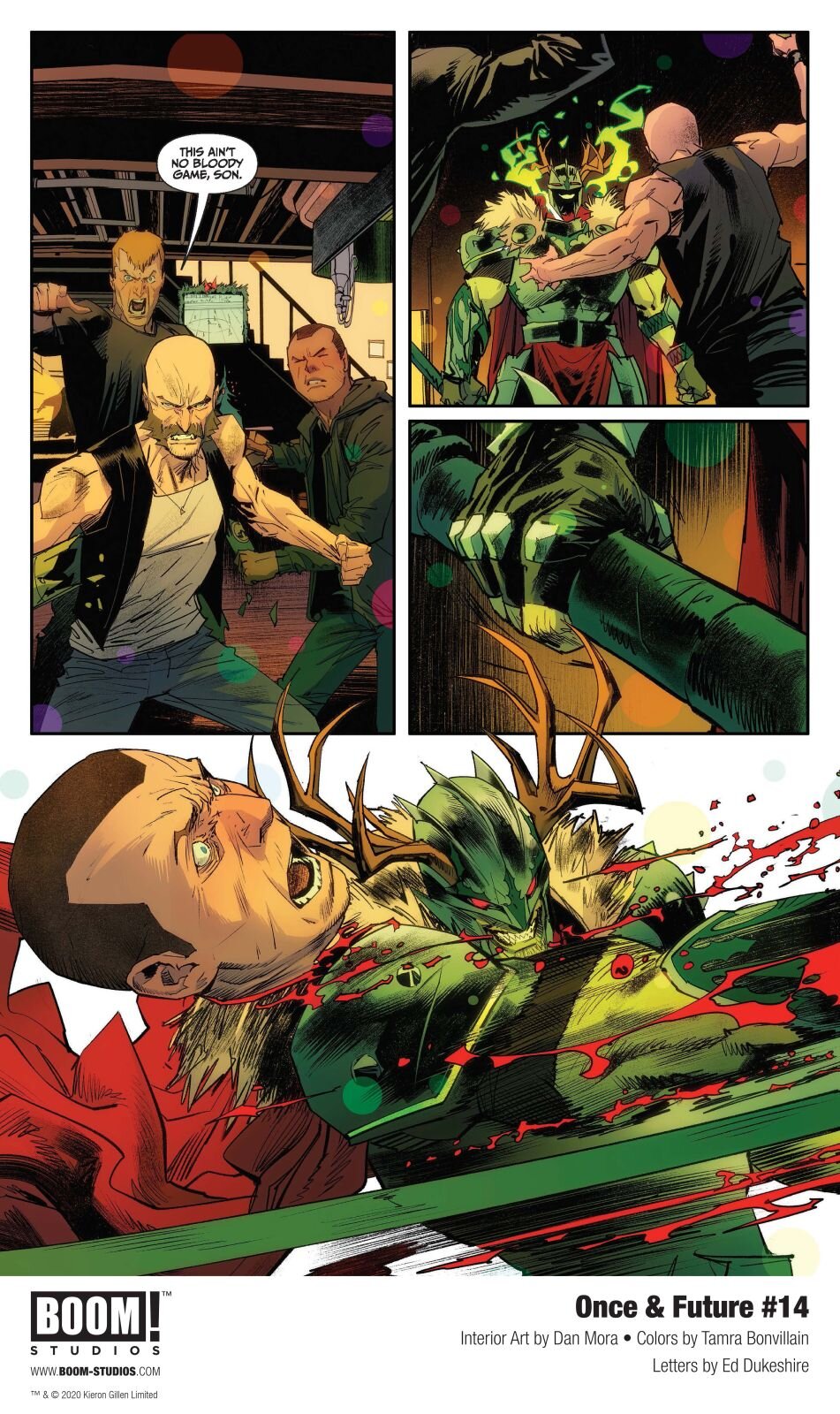 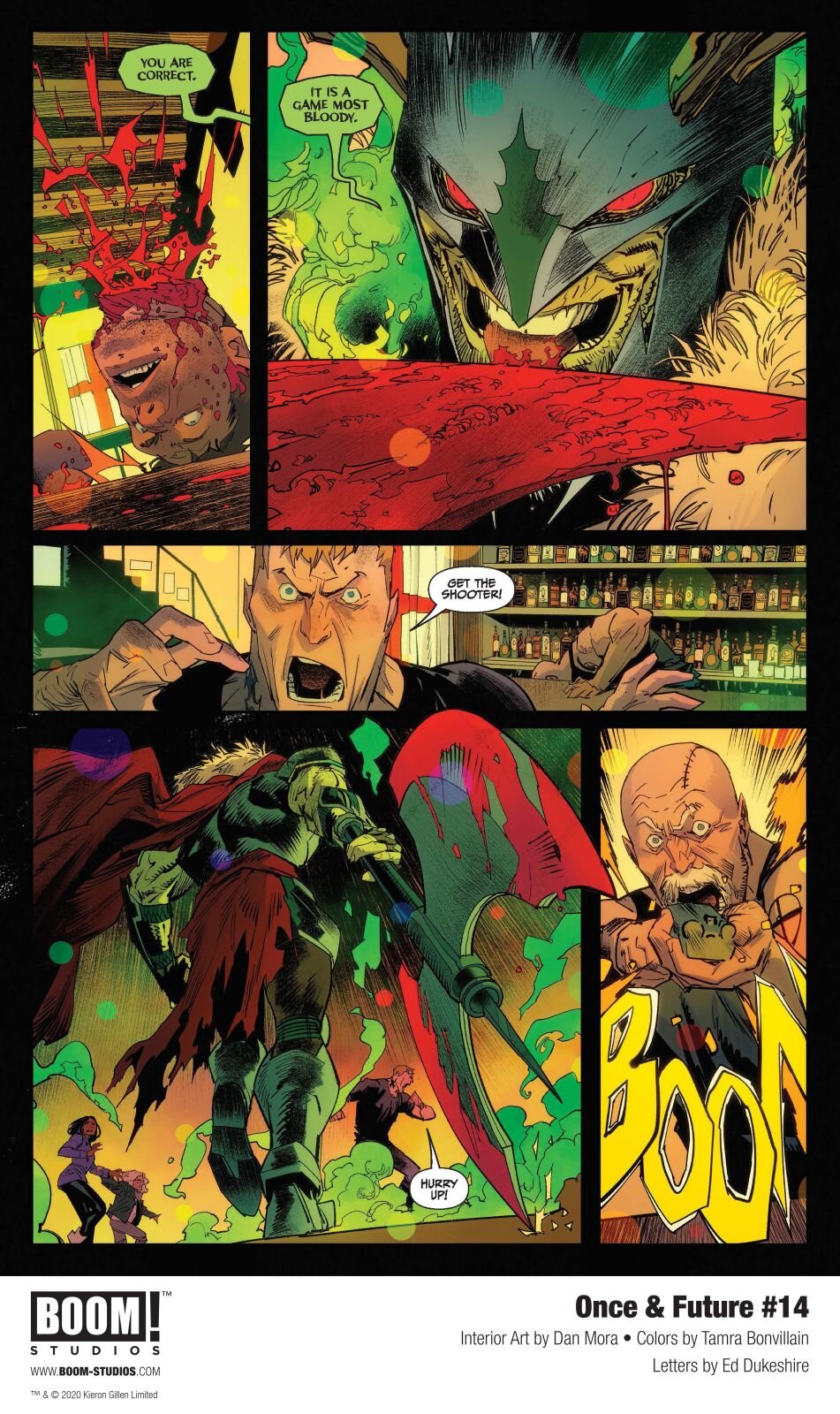 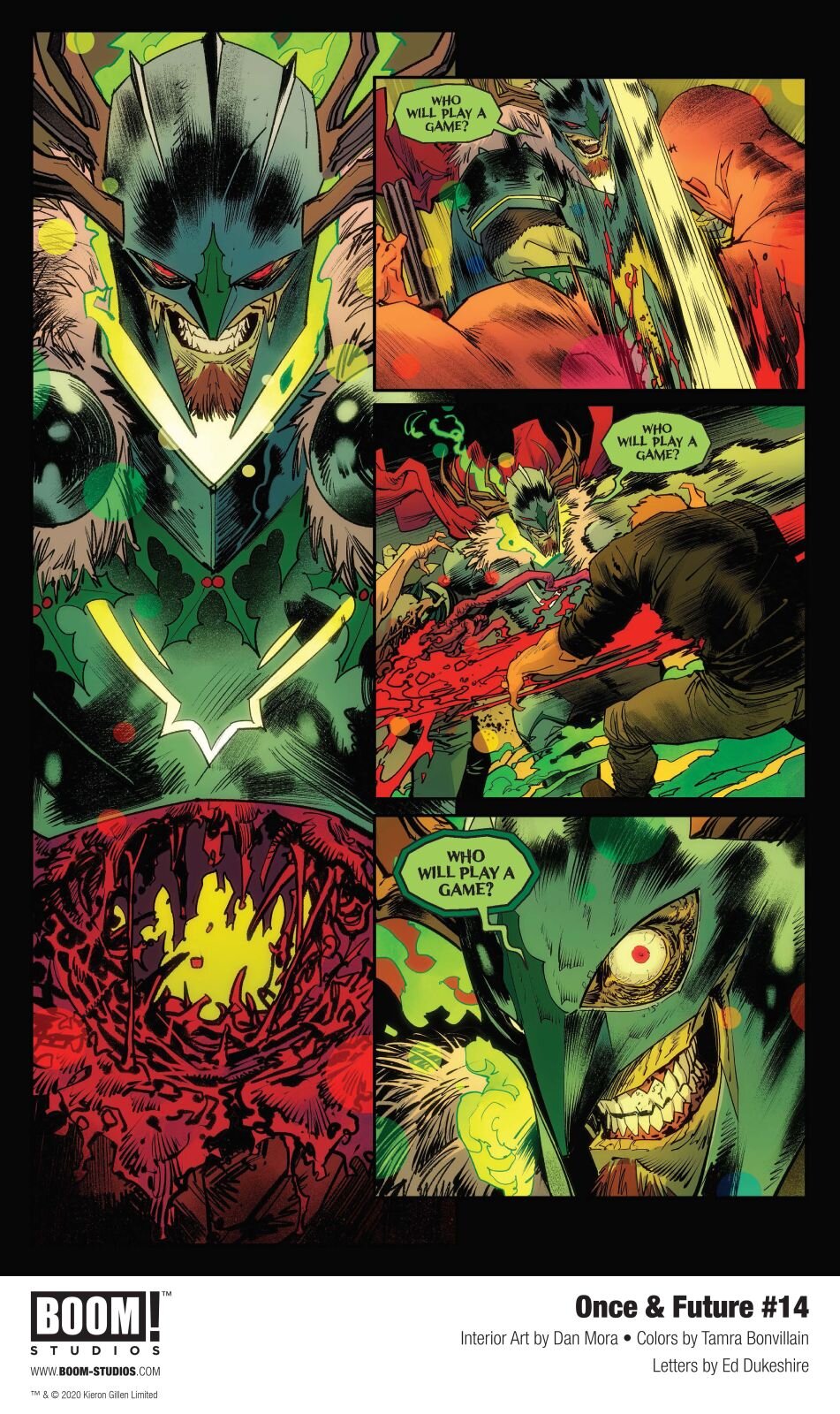 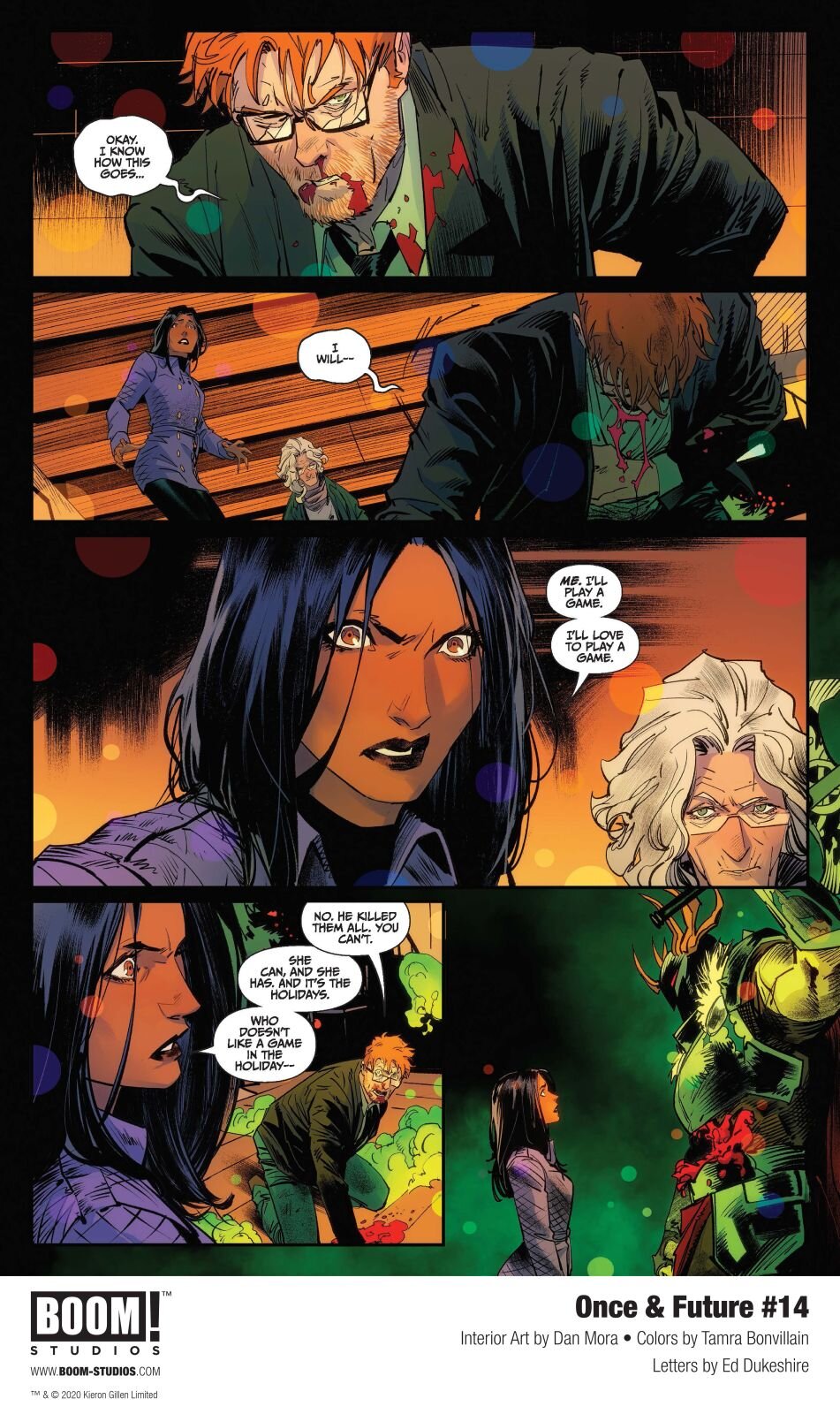 After scoring rave reviews from critics and audiences and leading a sluggish box office for the past two weeks, Universal Pictures has revealed that Christopher Landon’s horror-comedy Freaky is coming to PVOD platforms beginning December 4!

From the deliciously debased mind of writer-director Christopher Landon (Happy Death Day, the Paranormal Activity franchise) comes a pitch-black horror-comedy about a slasher, a senior, and the brutal truth about high school.

In Freaky (formerly titled as Body Swap), Seventeen-year-old Millie Kessler is just trying to survive the bloodthirsty halls of Blissfield High and the cruelty of the popular crowd. But when she becomes the newest target of The Butcher, her town’s infamous serial killer, her senior year becomes the least of her worries. When The Butcher’s mystical ancient dagger causes him and Millie to wake up in each other’s bodies, Millie learns that she has just 24 hours to get her body back before the switch becomes permanent and she’s trapped in the form of a middle-aged maniac forever. The only problem is she now looks like a towering psychopath who’s the target of a city-wide manhunt while The Butcher looks like her and has brought his appetite for carnage to Homecoming. With some help from her friends—ultra-woke Nyla, ultra-fabulous Joshua and her crush Booker —Millie races against the clock to reverse the curse while The Butcher discovers that having a female teen body is the perfect cover for a little Homecoming killing spree.

The film is directed by Christopher Landon, who co-wrote the script with Michael Kennedy. It is produced by Blumhouse’s Jason Blum with Couper Samuelson and Jeanette Volturno set as executive producers. We just got a video last week where CD Projekt Red showed off some gameplay for Cyberpunk 2077 on the Xbox One X and Xbox Series X. Now, the team has released an official gameplay trailer to build even more hype. The trailer talks about some of the classes you’ll see and parts of the story. Cyberpunk 2077 is set to release on December 10 for PC, PS4, Stadia, and Xbox One with PS5 and Xbox Series X|S console versions on the way.

If that’s not enough, there was also a new (and the final) Night City Wire episode where we get a look behind-the-scenes with Keanu Reeves, information about his character Johnny Silverhand, and a look at the music. Man, there’s a lot. How are you going to be playing?

Edward Steere has shared a new adventure for Dungeons & Dragons fans to enjoy called The Cages in Our Minds. This adventure is designed for four level 5 characters to take roughly nine hours.

In the adventure, players find themselves in the secretive and non-magical city of Ælgon when they must solve a murder, but while working on that, they uncover that there’s really more going on.

Play through nine hours of mystery, decision making, and discovery to forge your path through Ælgon. Rush headlong, or sneak into combat encounters with optional challenges to tweak the difficulty to your play style.

You can purchase The Cages in Our Minds from DMs Guild for $4.99.

The Sean Connery movie Finding Forrester is getting reimagined for the small screen at NBC. After working with the streaming platform for the second season of Altered Carbon, action-thriller Point Blank and Black Mirror, Anthony Mackie is reuniting with Netflix to star in and produce a new thriller entitled The Ogun at the service.

RELATED: Anthony Mackie Says The Falcon & The Winter Soldier is Like a Six-Hour Movie

The film, written by former stuntman-turned-action screenwriter Madison Turner, centers on Xavier Rhodes (Mackie) as he brings his teenage daughter to Nigeria to find a cure for the rare genetic condition that he’s passed on to her, but when his daughter is kidnapped, Rhodes goes on a rampage through the criminal underworld to find her before it’s too late, testing his powers to the limit.

Berman, who is currently in production on the Letitia Wright and Jamie Bell-starring drama Surrounded from Anthony Mandler (Monster), is gearing up for the January release of the supernatural drama Nine Days, which received rave reviews from critics upon its Sundance debut and brought home the festival’s Waldo Salt Screenwriting Award for Edson Oda.

Mackie recently wrapped production for Disney+’s highly-anticipated Marvel Cinematic Universe series The Falcon and the Winter Soldier and will next be seen in the psychological thriller The Woman in the Window, which Netflix is currently in talks to acquire from 20th Century Studios.

The sudden closure of hundreds of movie theaters in North America led to a dismal result at the box office over the weekend.

Netflix has shared a new holiday-themed promo spot for The Witcher for fans to enjoy. It’s titled “Holiday Slay Ride,” and this is the note that came along with the promo:

Come one, come all, and join all of your favorites from The Witcher this season on a bloody and brilliant “slay” ride through the Continent.

The promo features footage from the first season, but with some holiday flair that’s been added to it. It’s set to Christmas music and you’ll see colorful lights, presents, Santa hats, and more as Henry Cavill’s Geralt enjoys a little slaying.

It also looks like there might be a shot or two from Season 2, but it’s hard to tell.

Based on the best-selling fantasy series of books, THE WITCHER is an epic tale of fate and family. The story of the intertwined destinies of three individuals in the vast world of The Continent, where humans, elves, witchers, gnomes, and monsters battle to survive and thrive, and where good and evil is not easily identified.

The Witcher Season 2 is expected to premiere on Netflix sometime in 2021.

The Witcher Season 2 is yet to get an official release date but the Netflix series is surely decked for Christmas.

Death Tales is a 2D action RPG platformer from Arcade Distillery that released last month on Steam. Since launch, it’s received overall positive reviews and is the third title in Luc Bernard’s Plague Universe franchise. Now, the game is being brought over to the Nintendo Switch for fans to enjoy the game on the go.

Embark on an epic adventure, playing as a new reaper of death gone rogue! Protect your harbinger of doom with cool equipment and deadly spells. You can learn powerful attacks, perfect for shuffling your enemies off this mortal coil. Complete quests for a cast of quirky characters, who will force you to make difficult choices in this grim yet richly illustrated 2D world. Play alone or with a friend in local co-op and serve up a buffet of death upon your enemies together!

This game looks pretty good and the reviews I’ve read are encouraging. I’m also so delighted that there is local co-op. This is a feature too few games have these days in my opinion. There will also be an online co-op mode made available after launch. You can enjoy Death Tales on the Switch starting December 3.